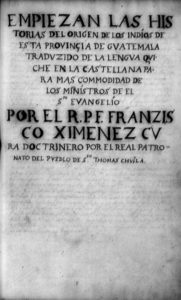 Popol Vuh is not an original title. Ayer ms 1515 (which is the oldest surviving source text) does not have an actual title and its heading merely says “las historias del origen de los indios.”

Carl Scherzer used Ximénez’s heading as the title to his 1857 edition, but it was Charles Étienne Brasseur de Bourbourg who coined Popol Vuh in his 1861 edition. Brasseur also included an astounding 262-page prefatory “dissertation” which seems to have caused Brasseur’s edition yo be regarded as more authoritative. Furthermore, Brasseur concealed the fact that he possessed the Ayer manuscript in his library. After Brasseur’s death, the manuscript passed to Alphonse Pinart and then to Edward E. Ayer who donated it to The Newberry Library in 1911 where it was not (re)discovered until 1941. This long period of unavailability prevented anyone from ever correcting Brasseur’s arbitrary title and it has stuck ever since.