Among the thorniest problems with Popol Vuh scholarship are the ethical issues of using unprovenienced material. Immovable Maya temples, altars, and stelae are self-authenticating. Other archaeological in situ artifacts are meticulously inventoried by their excavators to preserve their evidentiary value. Father Ximénez’s text, however, is not so easily addressed.

No dispute exists that the oldest surviving text of Popol Vuh is The Newberry Library’s Ayer ms 1515. Neither is there any dispute that it has been at the Newberry since the turn of the twentieth century when it was donated by Edward E. Ayer who had purchased it from Alphonse Pinart who had received it from Brasseur de Bourbourg. The disputes that Ayer ms 1515 is (or is not) Ximénez’s manuscript arise from inconsistent and contradictory statements from Brasseur concerning how and where he obtained Ayer ms 1515. Understanding the pedigree and provenance of Ayer ms 1515 Popol Vuh requires understanding the people that interacted with it.

Unlike modern literary texts, Popol Vuh is not defined by the static text that appears within the four corners of its pages. From Ximénez’s initial act of conservation to the present day, every edition and ever study of Popol Vuh promotes a different agenda. Ximénez plainly disclosed a evangelical purpose, though his paratext was cleaved from the narrative very early on with Brasseur’s 1861 edition. Scherzer seems somewhat disinterested in the narrative itself but rather keen for being known as its discoverer. Brasseur was plainly jealous of Scherzer’s recognition and Brasseur endeavored to turn his edition into an ethnological study. Today, arriving at an objective understanding of Popol Vuh’s significance requires a fundamental understanding of the agency of its conservator, Francisco Ximénez, of its first editors Carl Scherzer and Charles Étienne Brasseur de Bourbourg, and to a lesser degree, of Alphonse Pinart and Adrián Recinos. 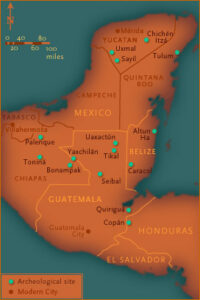 Nearly all Maya ruins derive from the Classic Period (roughly 250 CE to 900 CE) and predominately in the lowland regions. The oldest date-inscribed stelae from Tikal and Uaxactún correlate to European dates of 292 CE and 328 CE, respectively.

The term mythistory has been part of the English vocabulary since at least 1730 albeit with a continually evolving understanding (Mali 9). John Foster stresses a view that mythistory “does not imply a blurring of the metaphysical boundaries between history and myth” (107). END_OF_DOCUMENT_TOKEN_TO_BE_REPLACED  ›

Since Popol Vuh first entered the world stage in 1857, an extraordinary degree of unwarranted myth and misapprehensions of fact have become deeply entrenched in common perceptions of “Popol Vuh” as a narrative and as an object.

There simply is no evidence that highland Maya had copious glyphic ‘texts’. Editors and scholars of Popol Vuh frequently write and speak of “hieroglyphic books” among the Maya. The idea of Amerindian books and the prevalence of the same among the Maya derives from the memoire of Fray Diego de Landa END_OF_DOCUMENT_TOKEN_TO_BE_REPLACED  ›

Father Francisco Ximénez (1666 – 1729) came as a Dominican missionary to the New World in February 1688. His companions were initially dispatched throughout the province to learn the native languages. Although initially delayed by the completion of his novitiate and his subsequent acceptance of an administrative assignment at the seminary, by 1691 Ximénez was in San Juan Sacatepéquez learning Cakchiquel. He attained sufficient mastery in only two months so as to be END_OF_DOCUMENT_TOKEN_TO_BE_REPLACED  ›

The name Juan Gavarrete appears only in connection with Popol Vuh and his identity remains apocryphal and elusive. Whatever can be gleaned from the scant historical record indicates that Gavarrete was an archivist working in Guatemala City in the mid-nineteenth century. END_OF_DOCUMENT_TOKEN_TO_BE_REPLACED  ›

Karl Ritter von Scherzer (1821 – 1903) was born May 1821 in Vienna. Scherzer‘s true occupation remains a mystery, but he was never a physician. He worked a stint as a printer in both Leipzig and Paris and his participation in the 1848 revolution resulted in temporary exile. Scherzer spent three years in North America with Moritz Wagner from 1852 to 1855. It was during this trip that in 1854 Scherzer encountered several colonial manuscripts in the municipal library and in the library of the Universidad de San Carlos including three of Ximénez’s works: END_OF_DOCUMENT_TOKEN_TO_BE_REPLACED  ›

Charles Étienne Brasseur de Bourbourg (1814 – 1874) was born September 1814 in Bourbourg, France. After his ordination in 1845, Brasseur was recruited by Abbé Léon Gingras to serve in Québec. While his superiors insisted on additional studies in ecclesiastical history, Brasseur instead delved into the archdiocesan archives there at Québec and “published” his Esquisse biographique sur Mgr. de Laval, premier Evêque de Québec. Brasseur then left for Boston where he had previously formed a good relationship with Bishop John Bernard Fitzpatrick. Brasseur returned to France in late 1846 or early 1847. He joined an expedition to Mexico where he resided from 1848 to 1851. END_OF_DOCUMENT_TOKEN_TO_BE_REPLACED  ›